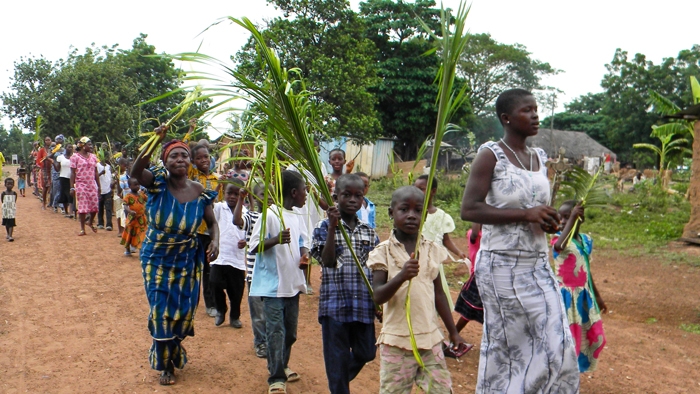 It has been said that for us to see our own culture clearly, we must first try to understand another culture and then attempt to look at ourselves from that vantage point. From my own long experience as a missionary and anthropologist I know this to be very true.

In our excellent SVD formation I have been exposed to Latin, Greek, at bit of Hebrew, Spanish, French and German. Of course, we also learned a little bit about the cultures of the people who spoke these languages—one can’t help it because the words themselves, the syntax, the proverbs, and other embodiments produced by these languages all tell something about what is important in them, and what is not.

When I reflect back on my own language and culture from these schooled experiences of the “other” it has always made me a little more aware of my first culture, of what makes it up, and how and why it is different from others. Often, to my utter surprise, it also tells me why some things in these other language/cultures are more practical and useful, or from the point of human life simply better than what is available in my own culture.

These are valuable insights. But the difference between the insights gained by studying another language and culture and those gained from living and learning in one are astounding. Schools offer far less than immersion, where, by a kind of osmosis, one imbibes all the appropriate roles and viewpoints expected in that culture. They are as night is to day, moonlight to sunlight, water to wine.

As a missionary in Ghana over the course of 36 years I had four assignments in different places and was privileged to learn four Ghanaian languages–Twi, Hausa, Anufo and Dagbani. And, since Ghana was surrounded by French speaking countries, also Togolese French—not to mention the particular brand of English spoken by Ghanaians. Because I lived with the peoples who spoke these languages—not the elites but the poor in traditional villages—I experienced a quite different way of life and came to understand them quite deeply. As I came to dream in those languages, I gradually found myself taking on a different personal identity, a different self. I also had the chance to affirm and analyze these experiences as a culture professional by teaching students of culture not only how cultures are different on the surface but also how they are very different deep down, and how these differences affect quality of life, the sense of belonging, human dignity, solidarity, and care for the common good.

This learning by immersion also sharpened critical thinking and self-understanding—qualities and skills that involve “thinking from a different place.” These are more needed than ever in our time where each nano-second institutionalized disinformation is pumped out byour all-pervasive media. At our present time here in the USA this sort of critical thinking, this historical sense of where we are going, is sorely lacking. We need this to spot the contradictions in the current discourse and understand the source of the contradictions. We need this sort of analysis to unveil the hidden currents, the truth behind the “facts” and undo the structures that bind us.

According to the rhetoric, we are a virtuous Christian nation. But not true! The contradictions are blatant. William Apess—a 19th Century Pequot Indian, Methodist minister and activist challenged his white Christian countrymen with the truth of the earliest encounters between the Pilgrims and Native Americans. Apess, who became a Christian, used the faith tradition brought over by the colonizers to lay bare the reality of that encounter. “It will be well for us to lay those deeds and depredations committed by whites upon Indians before the civilized world,” he writes, “and then they can judge for themselves who is the savage and who the civilized.” He tells us that the Indians suffered “the most daring robberies and barbarous deeds of death that were ever committed by the American Pilgrims with patience and resignation borne, in a manner that would do justice to any Christian nation or being in the world.”

Why are we so unable to address the catastrophic issues that envelop us? The film-maker, Bill McGarvey, (quoting professor Eric Cheyfitz) believes that this inability stems from the fact that “we have trapped ourselves within the limits of capitalism’s imagination.” It can’t take us any further. The historical roots are found in our sacred devotion to the four “P’s” –the concepts of property, profit, production and progress. “These four terms in conjunction with each other,” he says, “produce and guarantee the perpetuation of wealth inequality and environmental disaster.”

This goes far beyond a simple ideology; it is our faith, our “mythos,” and it impels our action (or inaction). Its high priests are our economists, property barons, bankers, and corrupt politicians. How do we as a nation break free from this cyber octopus? In Cheyfitz’s analysis the solution can be found in “the theory and practice of Indigenous communities.” The traditional foundation upon which native life is built is “based in the idea of balance (kinship, reciprocity and sustainability)” not competition and productivity.

This is exactly what I found in all the cultures I worked with in Africa. The notorious corruption found in “failed African states” is not at the village level; it rather stems from their own “high priestly” groups of economists, barons, bankers and corrupt politicians who are part of a globalized network of exploiters supported and exported by the USA, who have modelled themselves on the “great American dream.”

The problem is we don’t understand this. During the refreshments and “meet and greet” sessions after the main talks at formal academic and religious functions, I have often been asked by well-meaning big donors, “What is the answer to all the corruption we find in Africa, and how can they finally get on their own feet like us?” I was often tempted to give the following answer: “blow up the infamous American, Swiss, German, and Austrian banks that are stockpiling the plunder of Africa’s leaders, and financing their military coups, and providing the financial backing for the total exploitation of their human and material resources.”

We are already a long way down the slippery slope that will plunge us into a politically, morally and ecologically imperiled world. As Cheyfitz maintains in his writings, the answer starts with self-recognition. This special critical self-reflection can best be achieved by accepting the value in what our present leaders most despise—difference—and seeing ourselves through the eyes of other cultures.

N.B.: Material for this piece is taken from an article entitled: “What does Bernie Sanders’ win say about the future of capitalism?” which was published in America 2/13/20 by Bill McGarvey who referenced the work of Eric Cheyfitz,, the professor of American Studies at Cornell. Bill McGarvey is an award-winning filmmaker, writer and musician. He is the author of “The Freshman Survival Guide” and the owner of McG-Media.com.