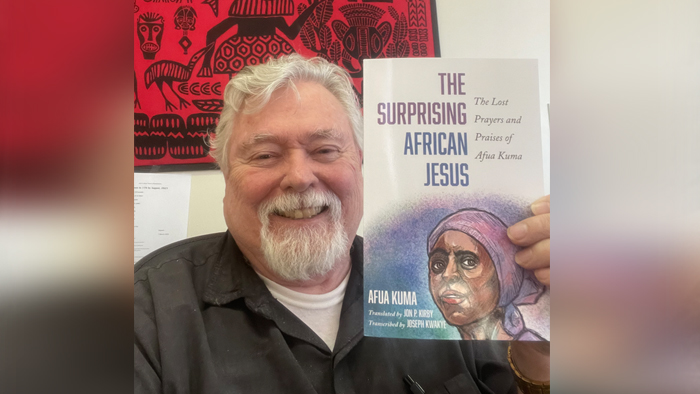 We missionaries go to foreign lands or wherever there are people who need to hear the word of God. The distinguished Nigerian professor, Agbonkhianmeghe Orobator, SJ, likens the process to Theology Brewed in an African Pot. We put the Word in the pot and stir in the special spices and herbs that make it sweet. Then the Holy Spirit jumps in and it starts to churn, bubble and boil. Sometimes it burns and tastes awful, at other times it gets kicked over and spills on the ground. But sometimes it simmers and brews until it turns into something new and unexpected–something more profoundly spiritual and religiously kingdom-esque, than anything previously experienced or imagined. It is that movement of the Spirit that makes it immediately recognized as the peoples’ own true food for everlasting life.

This is what happened, for example, on the day Juan Diego met Our Lady of Guadalupe. And it happened again the day an angel appeared to an illiterate Ghanaian woman named Aufa Kuma in a dream. The angel told her to praise the Lord using words that spring up from her heart. Then, as she awoke, the traditional kingly cantos that sprang from her heart and mouth in the Twi language, suddenly made Jesus recognizable to Africans.
When Karl Rahner was asked about the deepest meaning of Vatican II, he responded that, culturalogically speaking, the Church is no longer Roman but before our very eyes and ears it is starting to take its true form as a World Church. The prayers and praises of Afua Kuma have helped give shape to this miracle of our time.
The cassette tapes of her prayers and praises in the original Twi had been lost for over 40 years but one was finally discovered in 2017. My friend Joseph Kwakye transliterated it and gave a basic English translation. Then I edited the text, versified it and added 100 photos depicting the world in which Ghanaians live—the forests and savannahs, trees and rivers, animals and people, and the every-day events and experiences which Afua cracks open to show us God’s unexpected presence.
But enough talking about it—let us sit quiet and listen: 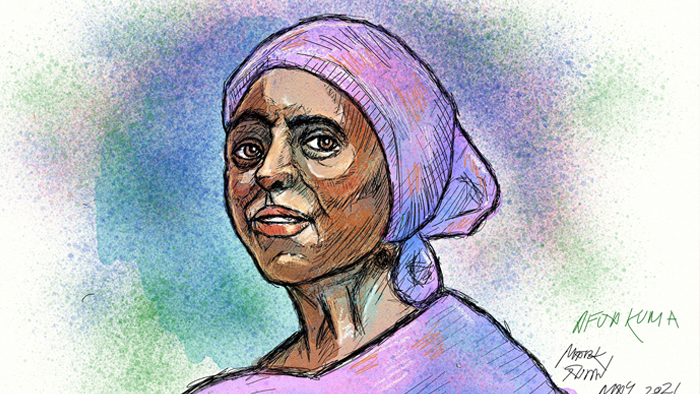 You are the precious Kente Cloth
and the colorful Dutch Wax-prints.
You brighten our celebrations.
We marvel at your majesty.
The fame of your beauty has spread.
You are the wonderful Silk Scarf,
which we use to cover our heads.
You are the Unbreakable Stone,
which cannot be smote by a fist.
You are a Violent River,
which one cannot blockade with sand.
You are a Powerful River,
which no bar of sand can oppose.
You are Lord of Travelers!
Your gospel reaches every land.

He, the Strongest of Fetishes,
we put our confidence in him
to buy us a two-story house.
Jesus is the Giant Needle
that cannot be found in a bag.
It is hidden in the lining.

Jesus farms his fish in the stream
where they multiply and grow fat.
The fattest of them he gives to us.
Those huge herrings and fat catfish
are offered by River Afram.

But now I am tangled in debts.
It is like hot melted rubber
had been plastered into my hair!
I attempt to pass by quickly
as I cast my eyes all around.
I fear that I might be noticed.
The things that I didn’t do well,
I boasted about them and lied.

The things I have done weighed on me.
I have borne them upon my chest.
All the goods that I have taken,
I offered no payment for them.
I said, “I am going away;
I’ll come again later to pay.”
These things weighed heavily on me.

I have carried them on my back.
But he has tied his cloth to mine,
and has taken them off my back.

Bring your empty stomachs to him.
and let them be filled with his fare.
He tells his children not to cry;
to come for their meat and be filled
—the meat of the young wild bull!

The book is available from Amazon or the publisher, Wipf and Stock, and a limited number of copies from the author, Fr Jon P Kirby [paperback $22; hardback $35].