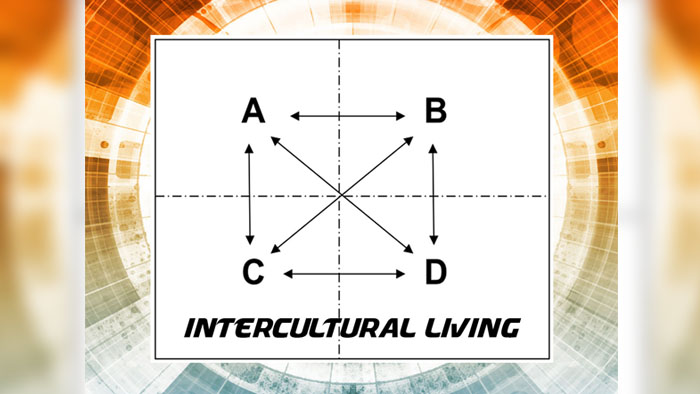 After watching the first YouTube video presentation on Intercultural Living by Fr Tony Gittins, the Riverside community gathered together to share some of their views and reflections.

One person observed that we SVDs are different from other religious orders who do mission work, for example, the Jesuits. When the Jesuits go to minister in a mission land they go from a particular province that is grounded in particular culture. They have to make the leap into the other culture. We, on the other hand, are different because even in the provinces where we do our formations we are already living in multicultural contexts, side by side with people of many different cultures. So, even before we are ‘sent forth,’ we have already experienced multicultural, if not intercultural, living.

In the early 1950s World War II was still on everyone’s mind. Prejudicial feelings towards our former enemies ran high in the public arena. But even though most of the members at Techny were Germans they loved Americans and readily accepted them, as well as members of other cultures, into the Techny community. They had the spirit of intercultural living.

One of the confreres spoke of his time in the Mexican Province. ‘In Mexico all the members talked only in Spanish. There were Americans, Indonesians, and Mexicans there, but everyone spoke one language—Spanish. So, it was easy to integrate and share with each other. Because of this, we always felt comfortable with one another. Whereas here in San Bernardino Diocese, whenever the Bishop invites all the priests of the diocese for a special luncheon at his residence, everyone goes and sits in their own little linguistic and cultural groups. It was always a big challenge to feel at home in those gatherings. It makes you realize that the American church still has a long way to go and we SVDs have an important role to play helping them to get there.

Some of our members who went through CTU had the opportunity of getting some training in interculturality. But it went far beyond just this didactic training. While they were in formation they actually lived as an intercultural community sharing the blessings of their great diversity. This has helped them to be able to live interculturally wherever they go. And now they are actively helping to make their multicultural parishes more and more intercultural.

Early in the 1960s various athletic groups formed from the various colleges and universities around the northern suburbs of Chicago. They used to come together to play soccer at Techny. At that time the average American didn’t know how to play soccer very well. The teams, therefore, consisted of students from Brazil, Argentina, China, India, Germany, England, Ireland, Australia and other countries. It offered a great example of how different cultures could come together in a spirit of sharing and competitive intercultural fun.

One confrere said that while he was doing his OTP in Paraguay he had the opportunity to goon a retreat there. He was surprised to find that, even though the retreatants were from many different nations and cultures, they found a wonderful way to share their cultural differences. Each person sang a song that was of great importance in their home culture. This sharing helped them to recognize and appreciate their differences and it brought them closer together.