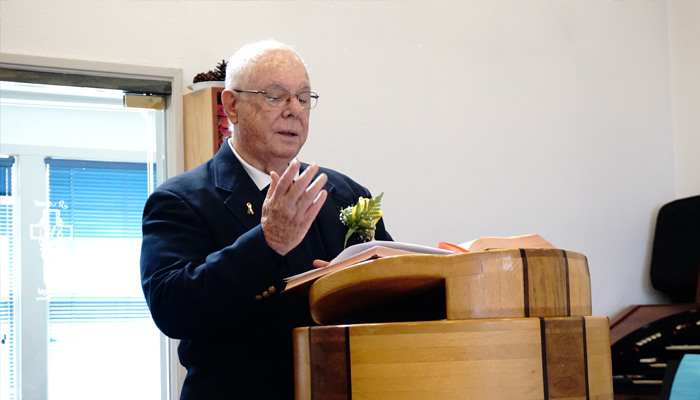 Over 68 years ago Brother Andrew celebrated HIS Golden Jubilee.  He was the first American SVD to reach that stage and I can still see him walking down the aisle in Techny’s chapel with a GOLDEN CROSIER in one hand and a corsage on HIS shoulder!   I was SO impressed and thought he was so OLD!
Whenever I visit Techny I make a point to visit the cemetery and say a prayer for Andrew and the many, many others who influenced and mentored me and have gone before.  On the way over I always pick up two stones from the gravel and place one each on the crosses of two men in particular.  It is a Jewish tradition which means a lot to me.  Sometimes the stones have survived the interim and if so I say a prayer and find another giant lacking a stone. To me this body of apostolic men and women, along with the laity that surrounds them, illustrates the meaning of it all.  Here is the church in situ.  It is made up of modern day Apostles and Prophets who have answered the call and tried to carry the gospel message as did the original Apostles and followers of Jesus Christ.  Not all were terribly successful.  Some were flawed in one way or another but, by God, at least they tried. And I include those original twelve in that assessment!  Such is the story of the Church.  Jesus personally called men (and women) AS THEY WERE and asked them to follow him and that paradigm continues down the years. When I meditated on this it came as an epiphany of sorts.  This is what it is all about.  We SVD are not unique; we are simply following in the footsteps of giants from the Apostles and their ilk down through the ages, to Arnold Janssen and on to us.  We have all been blessed to be part of this Divine calling and very Human institution. 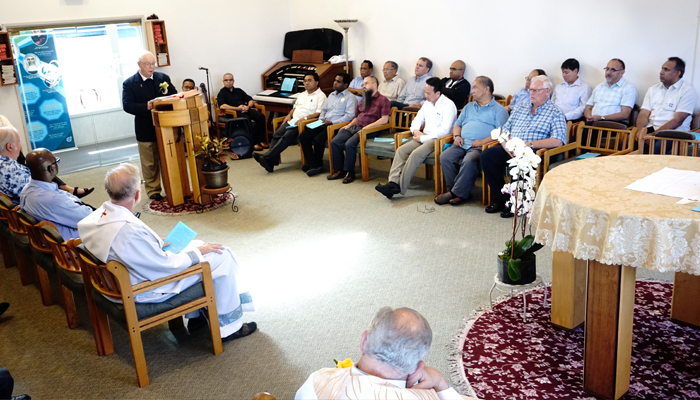 But let me step back a bit.  It just so happened that I was reading Fr. Thomas Rosica’s article (We Can Only Move Forward When We Name the Evil of Clericalism) when Soney approached me and asked me to give this talk.  Father Rosica’s article commented on Pope Francis’ letter to “The People of God.”  So I agreed and thought that this opportune article might have something to offer here.
Pope Francis was very succinct and touched upon a very important element that has run through my life and maybe yours. Clericalism. Now believe me I am not grinding any axe nor casting any personal stones but to quote the Historian Jon Meacham: “To learn from the past is to embrace its complexity and not simplify or air bush what it has to offer.”  In that light, the Papal observations do highlight a serious element in what we are trying so hard to accomplish.  I submit that it is something we should fearlessly take out and examine honestly.
Pope Francis himself noted in his recent letter and I quote: “Clericalism, whether fostered by priests themselves or by lay persons, leads to an excision in the ecclesial body that supports and helps to perpetuate many of the evils that we are condemning today.  To say ‘no’ to abuse is to say an emphatic ‘no’ to all forms of clericalism.” 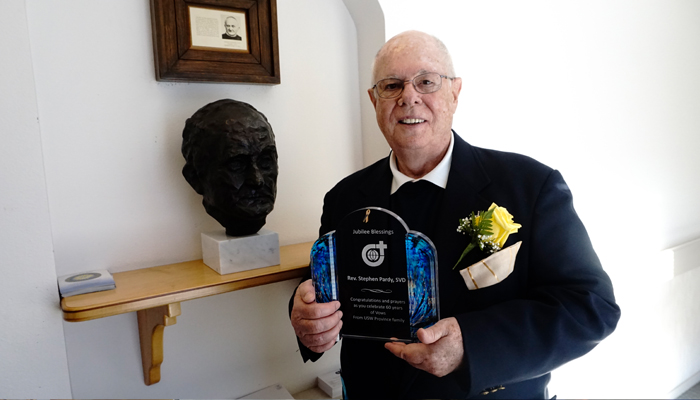 When I, and those of my age, entered the SVD there WAS clericalism. Status and rank were very much part of the whole system.  We all accepted it as the norm!  Pope John XXIII clearly recognized this as one of the factors which led him to call for a Ecumenical Council to “open the windows” and let in light on this subject among others.  As a result things HAVE changed step by step and I personally am a witness to that.  For starters, I believe that I am the first SVD Brother to have been given a Generalate, vs a Provincial, appointment as a Provincial Treasurer in not only one Province but eventually three others. And that WAS a watershed!  So we can see that the Generalate appreciated the challenge early on.  It continues to chip away at this mighty oak today.  (Mind you, the Generalate is up against a formidable bastion with the Vatican and the norms IT has built to protect itself from any incursions.)
The SVD that existed 60 years ago is not the SVD that we have today.  I will give you an example. I am constantly struck and impressed by the young priests today (led by an older one, I might add) when we gather for a meal. They not only prepare the meal but serve it and then wash the dishes afterwards. Now that may seem like a small thing and we may take it for granted but that would have been unheard of in 1958. That task was for the lay Brothers who not only catered to the needs of the Clerics but followed the Clerical Novices in any procession that made up our ceremonies and formation. (Except for the Sisters in the Kitchen of course. They ALWAYS pulled up the rear behind the lowest High School candidate!) 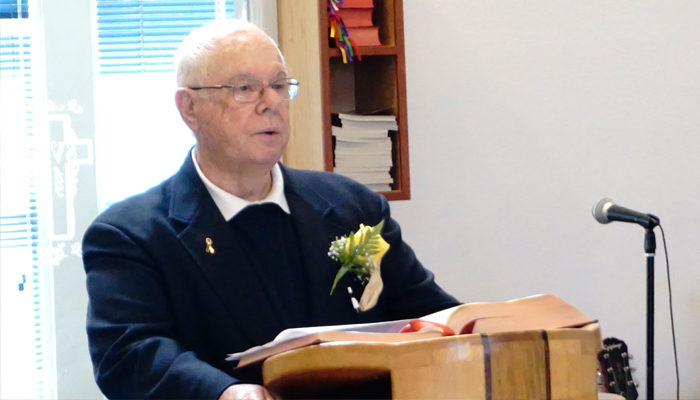 With complete respect to the Clerical state this was and is a serious problem as Francis points out. This rarefied clerical band of brothers I actually find impressive and in fact admit to a twinge of envy as to what they share in common.  It is a beautiful thing.  But taken to a Class Conscious Status it has a downside as well. Not only for the Sisters, the Priests and the Brothers in the church but more importantly the laity who take their clues and understanding by what they see made evident in front of them. By that I mean that we may be able to pull ourselves as fellow religious in line but educating the People of God will be a larger, more important task today. “It is the hour of the laity” Bergolio said, “but it seems that the clock has stopped.  Watching the People of God is to remember that we all entered the church as laity.”  And of course this is so very well described in the readings we have today.   In the first instance Paul’s metaphor has the Church as the body of Christ; one body made up of many parts.  The second deals with gratitude and I hope I would be at least one of the ten to express my gratefulness today.
But at the risk of overloading you with another Papal quote let me add this one:  “Without individual conversion, all structural change would prove useless while pastoral concern and a spirituality of service and communion “are” the antidote to all the venoms of vain ambition and illusory rivalry”
But back to the Basilian who points out in his article: “In his conclave-changing address to the cardinals on March 7, 2013, four days before his election to the See of Peter, then-Cardinal Jorge Mario Bergoglio identified what he believes is the church’s fundamental illness: ecclesiastical narcissism! ‘When the Church does not come out of itself to evangelize,’ he said, ‘it becomes self-referential and then gets sick.’ That inward-looking Church, bent over on itself, obsessed with her own image, which doesn’t look sufficiently to Christ and doesn’t reflect him, his light and his love for those walking in darkness, quickly succumbs to what he called the worst evil of all, a ‘spiritual worldliness … living in itself, of itself, for itself.'” And again: ‘The reform that is critically needed is neither to clericalize nor ASK to be clericalized.’  BUT as Father Rosica also adds:”We have a God-given right to be angry over the current situation but no right to despair!” 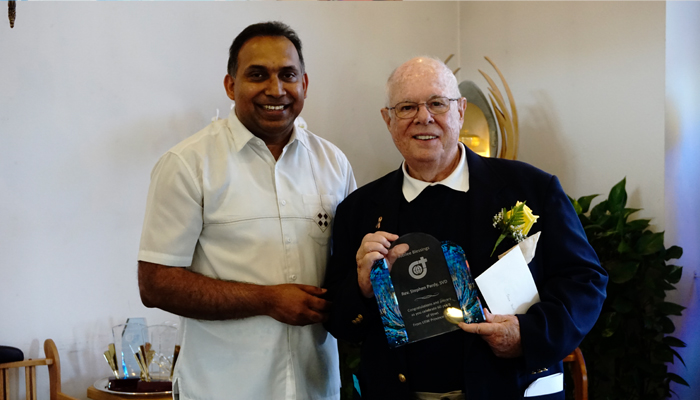 And I don’t. But it IS an interesting article and I recommend this Basilian’s literary effort to you all.  As St Augustine so beautifully described himself to the flock he was about to shepherd: “WITH you I am a Christian; FOR you I am a Bishop!”  Somehow that seems to have been overlooked in the centuries that followed.
Personally I have had an enjoyable 60 years in the Society with wonderful experiences serving in many parts of the world.  I have no regrets to speak of and can only appreciate what the Society has invited and enabled me to partake of in the many corners of the world to which I was assigned.
Congratulations then to all my fellow jubilarians and thank you for hearing me out.  It has been a great, rewarding, educational ride and I truly thank God “from whom all blessings flow!”  Brother Andrew’s Jubilee was my first introduction to such an event as we now share today.  In those ceremonial days you got a silver crosier on your silver jubilee and after FIFTY years you got a gold staff. AND a corsage!!  On the 60th as you can see, the corsage is still in vogue.  I am extremely blessed that the crosier is not needed, silver, gold OR platinum! I AM truly blessed.  Thank you.
Stephen Pardy, SVD
September 10, 2018 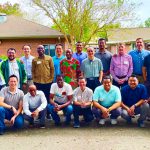 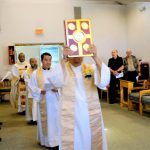 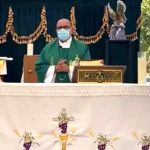