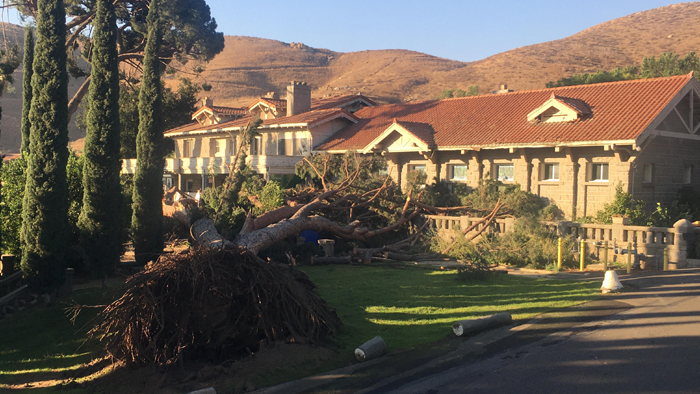 On Monday, October 26, the first Santa Anna wind of the season hit the Inland Empire broadside with hurricane force. The good news—clear skies and tremendous views of the mountains. The bad news—power outages, dust, and flying debris, but worst of all, the sudden death of the stalwart 100 year-old “stone pine,” or “umbrella pine,” nearest the Stonehouse chapel.

In the late afternoon the sudden thunderous crack and foundation-shaking thud could be heard and felt for miles. We rushed out of the Province office only to witness a veritable Armageddon stretched out before us. Startled and shocked, we slowly surveyed the scene, starting from the rootless chasm that mocked our eyes, and glancing down at the long winding trunk—the ponderously thick trunk with a 4 foot diameter—that was now half-buried in the Stonehouse lawn. Then our already over-fed eyes finally came to rest on the massive chaotic tangle of branches and foliage that only a moment before was high above our heads giving acres of shelter to all beneath. But now it was lying there like a beached whale with a dozen long arms still waving in the wind and another dozen beneath. This vast snarl of limbs had crushed the once tall cypresses, suffocated the submissive kumquat trees, and obliterated the walkway and the staircase to the chapel, before perilously resting on the building’s red tiles. 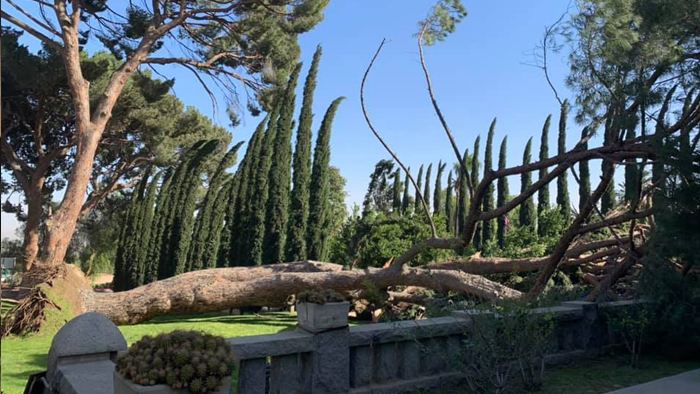 Those three monumental trees that lined the road up to the Stonehouse have long been hallmarks of our SVD Riverside property. They have been an integral part of “Marygrove” (the original name for the Divine Word Seminary) for so long that they are part of our very identity. They were planted when they first built the venerable Hole Mansion, which we call “Stonehouse,” and they were there long before any of the other buildings popped up. I was climbing in its branches trimming away the dead wood under the direction of Fr Busch 60 years ago. And it was a giant even then.

It is as if one of the three great guardians of our beloved “Marygrove” has fallen, and with it, the entity itself has been diminished. So let us mourn for our fallen guardian. Something of our very self has died. It is the end of an era and the province will not be the same without it.