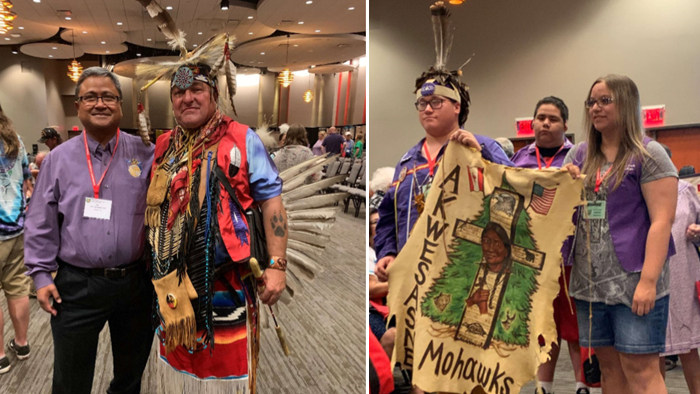 The Tekakwitha Conference of the Indigenous Catholics in the United States was held in Sharonville, Ohia from July 18-20, 2019. Herman Manuel attended the conference. Herman is the pastor of Saint Kateri Tekakwitha Parish, Barona. It is one of the Native American parishes of the Diocese of San Diego serving the communities of Barona, Sycuan, Viejas.
The Tekakwitha Conference is the largest gathering of Indigenous Catholics in the United States, named after the first Native American Saint, Kateri Tekakwitha. Tribes from across America gather for three days for workshops, talks, Mass, and fellowship with many bishops from Native American populated dioceses in attendance to lead liturgies and listen to issues concerning their Indigenous flocks
This year the Conference celebrated their 80th Year Anniversary. Every Conference marks a colorful grand entry at the beginning with representatives of Native Americans from the 50 States along with representatives from Australia and Canada wearing their own Traditional Regalia. One of the highlights is the Traditional Powwow gathering that lasts for the whole night with dances, songs, drums and prayers.
Another highlight of the conference was presentation regarding the future canonization of new saints including Nicholas Black Elk and the 140 plus martyrs of La Florida. In adulthood, Black Elk was a prominent Oglala Medicine Man, father, and tribal leader. Later in his life he converted to Catholicism. His great moral character and skill as a catechist led to the conversion of hundreds of his tribesmen. Black Elk’s love of both his faith and Native culture has led his grandchildren and tribe to formally petition the bishop of the Diocese of Rapid City to nominate Black Elk for the cause of canonization.
“Experiencing the cultural, social and spiritual life of the Native Americans has led me to a deeper appreciation and insight to what our Divine Word charism truly means,” shares Herman Manuel.