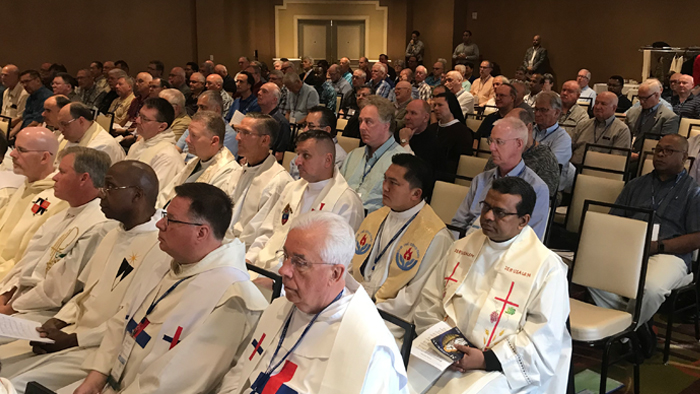 The Conference of Major Superiors of Men (CMSM) National Assembly took place in San Antonio, Texas from August 5-8, 2019. Nearly two hundred members representing the many men religious orders participated in it. The theme of the assembly was Discerning Our Collective Witness. Msgr. Dennis Kuruppasserry the First Counselor represented the Nuncio. He addressed the assembly on behalf of the Nuncio after the inaugural Mass. He said that in our journey as religious we need to look toward the horizon for new ways in hope. The highlight of the assembly was the presentations by Bro. Larry Schatz, FSC, Abbot Elias Lorenzo, OSB and Rev. Ron Rolheiser, OMI. Bro. Larry and Abbot Elias shared on the Reflections on Religious Life Today and Ahead.
Bro. Larry in his presentation said that leadership is becoming more complex day by day. There are three major challenges. The first is the accusations and allegations. They are hard and unpredictable and as a result life becomes an ongoing interruption. The second is the aging and diminishing religious life. Some of the things to keep in mind in this regard is how do we prepare our new leaders, keeping our eyes in the horizon and taking care of oneself in the midst of the uncertainties and interruption. The third challenge is the fraternal relationship. In spite of these there is a hunger for spirituality, silence, service and mystery. This is something we could offer to our young today. So what is important is a renewed focus on evangelization and accompaniment.
Abbot Elias shared that it is going back to the future. Are we asking the young only to follow us or how much are we willing to sacrifice? We need to avoid retro judgment. The young are radical. They surely want the rosary, adoration and popular devotions. We say that we have had it! But the reality is that they did not. We need to accompany the young and meet their requirements. There should be certain dialogue and it is to accept the same view point. Therefore religious life today is not a diminishment, it is the reality and it is normal. We need to re-found the institution because this is the new normal. We need to allow the old man/woman see dreams and the young to see visions.
Ron Rolheiser in his presentation shared that we need to radiate life. There are many challenges. The Biblical challenge is that we are standing on new boarders. There is the Ecclesial challenge, the human challenge and the institutional challenge. Risk is important. The best example is the parable of the feeding of the five thousand. What is important is to risk rather than die of hypothermia.
The assembly elected the new president and other office bearers for the next two years.
It surely was a moment to see and hear what everyone feels in the light of the changing scenario of vocation and religious life. It was also a time to feel the solidarity during this time of accusations and allegations. The assembly also discussed about the new standards of sexual abuse policy being prepared by Praesidium which would be presented to the regions in the coming months.
There was a visit to the Mission San Jose Catholic Church to celebrate Mass with Archbishop Gustavo Garcia-Siller, M.Sp.S and surely the scenic beauty of the River Walk. 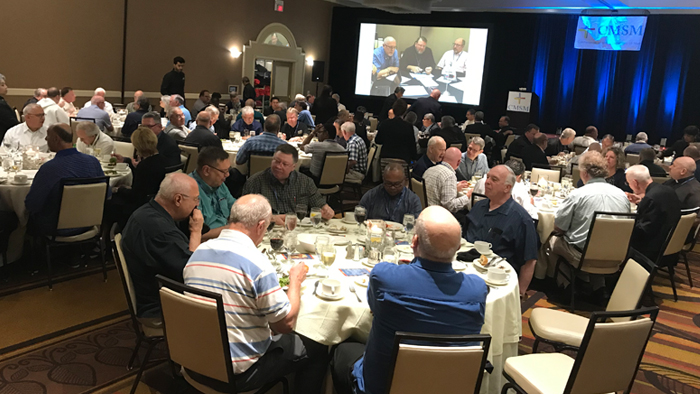