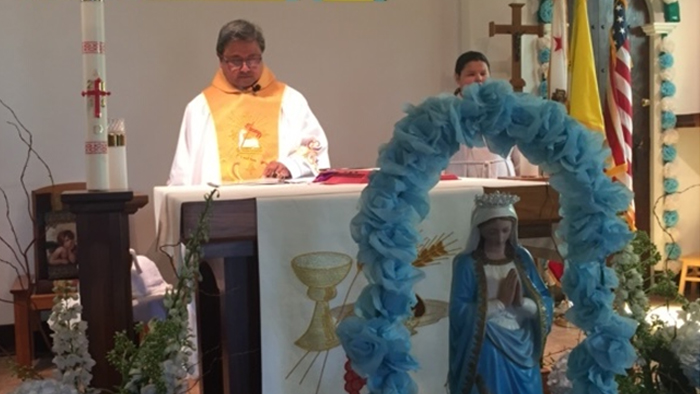 In the Kumeyaay Nations of Barona, Viejas and Sycuan, the crowning of Mary is one of the most and popular yearly celebrations  of the Catholic Mission Churches aside from the Powwows where Native Americans from all over the United States gather together to celebrate their life and culture. May Crowning started way back in the 50’s BC (Before the Casinos). Compared to May Crowning, Powwows started later or in the 60’s.

In 1953, a group of women belonging to the Altar Society, whose activities included cleaning the Church daily, making sure that the front of the altar as well as all statues are with flowers, and washing the vessels and linens after Eucharistic celebration have come together to decide that there needs to be crowning of the Blessed Virgin Mary in Church in May every year. So with the help of their pastor who belonged to the Verona Fathers now known as Comboni Fathers, have decided that the 1st Sunday of May from then on will be the crowning of Mary.
A young girl who is 15 years old is chosen as a queen to crown the Blessed Virgin. This girl should be of good Catholic upbringing. However, if there are many girls who are 15 years of age one is selected by a unanimous vote from among the ladies themselves. 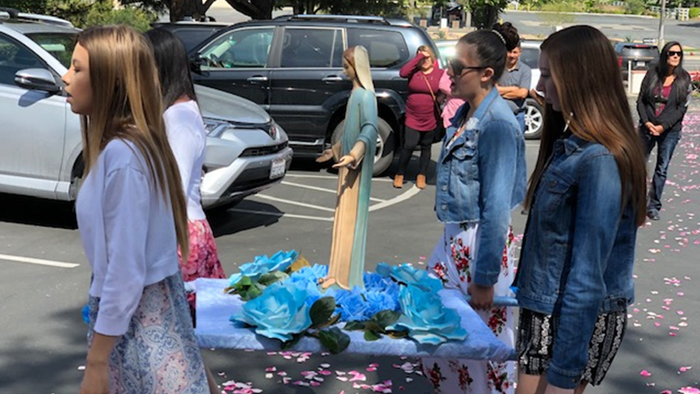 May Crowning is celebrated with procession of the statue of the Blessed Mother from one end of the reservation to the other end. Flags of the United States and the Kumeyaay Nation of Barona lead the procession followed by altar servers carrying the Cross and candles, little girls dressed in white with veils throwing rose petals to the ground, their pastor, the chosen queen and lastly the statue of the Blessed Mother. Rosary is prayed during the procession with alternating each decade with a song of Mary.
As soon as everybody gets back to the Church, Mary is crowned by the queen and Mass begins. After the Mass, the family of the queen feeds the people who came for the celebration. This is usually a big hearty meal. 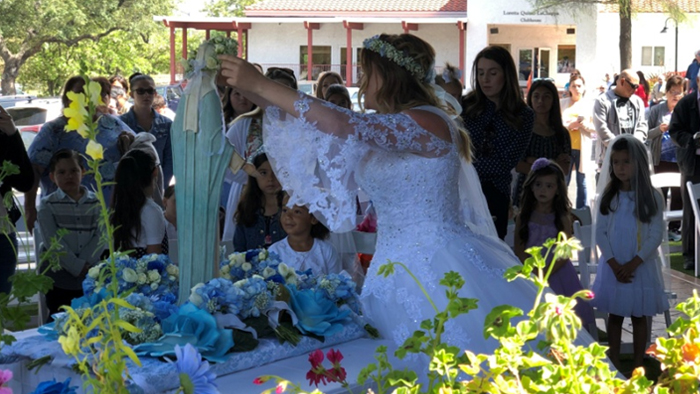 Viejas’ history is the same as Barona only it started a few years later. And so, both reservations through their pastor again decided that May Crowning now takes place on the 1st and 3rd Sundays of May alternating each year. This has been passed on from generation to generation until now here at St. Kateri Tekakwitha Parish. Sycuan is a little bit odd because Crowning of Mary takes place on the eve of the feast day of their patron, Our Lady of the Immaculate Conception which is the 8th of December.